I’ve had a thought rolling around in my head intermittently since a week or so ago when I listened to an episode of the podcast The Mom Hour. I believe it was Episode 279, titled “Home Learning Success Strategies + Our Kids’ Fall Schooling Update.”

They were talking about how virtual learning was going for them currently- one host lives in California, the other in Michigan. Sarah Powers (one of the hosts) brought up the fact that at the end of the “school” day, she has been cleaning/ tidying up her daughter’s school area for her (throwing away garbage, straightening up the folders, papers, etc.).

She said that on the one hand, it seems like maybe that should be part of her daughter’s responsibility. After all, she is the student and it’s her mess. However, for whatever reason, Sarah (the mom) has found that she has really been enjoying taking care of this specific, minor task. She said it has been bringing her happiness to see her daughter’s school work, the doodles on the paper, shuffle supplies around…and that maybe it just feels like a very “mom-like” thing that she can do for her daughter in these strange times.

Even though her daughter is (I think?) older elementary aged and I’m sure quite capable of cleaning up after herself, Sarah said she has decided to just let this one slide and do it for her.

It made me think a bit about some of our routines at home. Specifically, our morning routine.

I have spent an embarrassing amount of time over the years semi-obsessing over the kids and how they manage (or don’t manage) their time and tasks in the morning. From getting out of bed to getting out of the door always has felt kind of like….a total mess. Not everyday, but a few too many days.

There’s just a lot going on in there. Getting dressed, making beds, picking up clothes, brushing teeth, wiping out sinks, lunches, breakfast, hats, gloves, shoes, library books, permission slips…plus there’s the ever present ticking CLOCK staring us in the face, urging us to hurry up or we’ll be late.

I have struggled a lot (more so when the kids were a little younger) with trying to balance exactly how much the kids should be responsible for and where I should be stepping in and helping to make things go, well, faster. I think in the past I have fixated probably a bit too much on the idea that the “kids” need to be super independent and responsible for themselves in the mornings. Maybe there’s a nagging, subconscious fear in my mind that my kids will go off to college and have no idea how to fend for themselves. I don’t know.

Hearing Sarah’s comment on the podcast made me think though. I mean, I do want them to take responsibility for themselves, in general and in life, but maybe it’s not wrong for me to make their breakfasts or pack their lunches sometimes, either! Maybe it doesn’t need to be all or nothing.

Ivan and I have gone around and around on this. He thinks they are plenty old enough to prepare their own breakfast and lunch and sometimes says he thinks I’m “babying” them by serving them all the time. And he’s right- they are old enough (and capable enough). But honestly, they are still way slower at doing everything than I am! It stresses me out and I’m always worried we’re going to be late…and then the yelling starts…. Maybe, for our sanity, it’s okay for me to just do this one for them. Maybe I don’t need them to “prove” their independence at that exact, precise moment of the day.

The mornings really just go much smoother if they deal with getting dressed/ their rooms/ their backpacks ready and I deal with getting the food on the table. Maybe it’s A-okay to just accept that and move on. 🙂

Just some random thoughts today! What do you think? Is there anything you do for your kids that they “could” do themselves, but for whatever reason you prefer to just do it yourself??

I was reminded the other day that back in 2012, we took one of our first “real” family vacations with the boys. Asher was 2 and Ethan would have just turned 4 I think. We went to Niagara Falls and Toronto! It was fall (right around this time) and it was soooo beautiful!! Look how cute and little the boys were!! 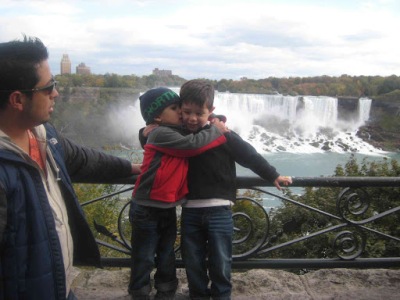 Daily Gratitude:
I am grateful for technology that allowed a tele-health visit for Ethan yesterday (from our van, parked outside the school!). It was just a quick appointment, and this was awesome. I didn’t have to drive all the way to the other side of town and back- so this saved TONS of time! Another “perk” of the pandemic…. 😉