I need a happy story today. I stayed up too late watching some news and ended up going to bed with a pit in my stomach. When I woke up, my mind went right back to it all and the pit returned.

I need to stop thinking about that and focus on something positive.
So, I think today is a good day to use my “Travel Tuesday” series to share about a tradition that always warms my heart.
For anyone who doesn’t know, my in-laws live in Toluca, Mexico. Ivan was born and raised in Mexico City, but his family has lived in Toluca for years now (a little over an hour west of Mexico City). We’ve been there to visit many times, and the boys always love it. It’s definitely a different way of life from what they are used to, but I think that’s much of the appeal!
There are a million Mexican traditions that I could talk about, but one that I really love is the tradition of the cena at my in-laws’ house. 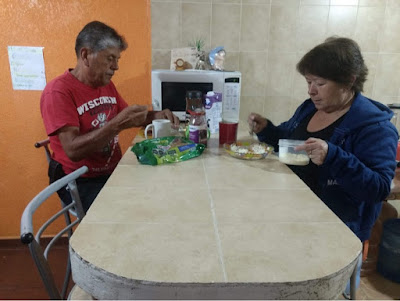 Cena= dinner. Kind of.
This requires a little explanation. Meal times are generally different in Mexico. This used to be a source of confusion/ frustration when Ivan and I were first married. Here in the U.S., standard meal times would be breakfast ~7-8 a.m, lunch ~12:00 and dinner (the largest meal) ~6 pm. Right?
Well, in Mexico (at least at my in-laws’), they tend to have desayuno in the morning (8-10 a.m. and often pretty light), then the comida (the largest meal- like a big “lunch”) later in the afternoon, say 2-3 pm or so, and then the cena (again, lighter) later at night, before bed.
At their house, the big “family around the table” meal is the comida in the afternoon. It’s what I would compare to an American evening, family dinner with meat and potatoes (except their “meat and potatoes” are usually very different (and arguably more delicious!).
The tradition I personally think is nice, though, is the cena. The comida is great too, but I’ll try to explain why the cena wins at my in-laws’ house.
The cena oftentimes comprises of a lighter meal, like I mentioned. It might be a small plate of leftovers, or maybe a quesadilla or sandwich. If the comida was heavier, it’s often just a snack of some sweet bread or toast with jam or something like that. They always have coffee. Right before bed. 🙂 Instant, Nescafe coffee.
It’s this special time in the day, later at night (say, 9-10 pm) when people just gather together to eat a bit and talk. It’s not formal. At their house, they just sit or stand around the breakfast bar.
But it’s the time in the day when I think the best conversation happens.
It’s a relaxing way to unwind at the end of the day. When we are there visiting, it usually turns into a longer ordeal, full of stories and laughter. People just lingering, chatting. Drinking coffee (when I’m there, I make tea. My father-in-law drinks tea often too).
I always know that if I’m anywhere near the kitchen around that time of night, my mother-in-law will call to me, “No vas a cenar??” (Aren’t you going to eat?) She’s always worried I won’t eat enough. 😉  She need not worry. Trust me. I eat my weight’s worth of Mexican food when we are in Mexico.
When we come home after our visits, I miss that. We don’t do it at our house. We could, I guess, but we don’t! I mean, we do have “family dinner” many nights, earlier in the evening, but it’s not exactly the same. We typically follow a more American style meal pattern now, so we don’t really eat anything right before bed.
That connection time right before bed is special, though. There’s no TV on or other distractions- just people connecting and talking over food with their loved ones.
I know that even when we aren’t there, mis suegros (in-laws) still do this every night. It’s nice. 💗
A few other pics of their street in Mexico: 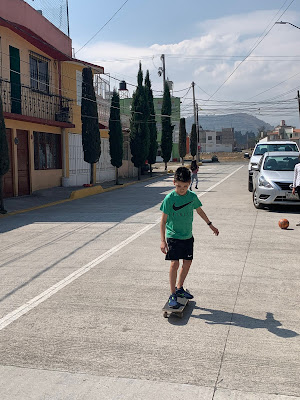 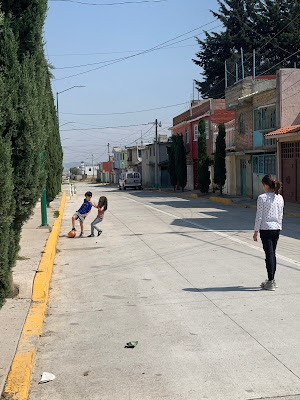 Daily Gratitude:
I’m grateful for my in-laws! So many people complain about theirs, but mine are pretty great. They are the NICEST people you’ll ever meet.

7 thoughts on “A Mexican tradition”