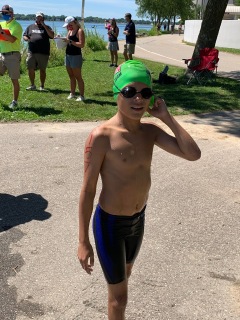 Finally! After 2 cancellations, Asher was finally able to complete the 1.2 mile open water lake swim yesterday. Maybe things really do work out how they’re supposed to, because the conditions yesterday could not have been any better.

We had full sunshine, no wind and warm temperatures. The lake looked SO beautiful!! 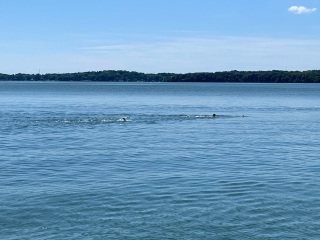 I’m really, really proud of Asher for doing this. When we first got the email about it, I asked him if he wanted to sign up. He had paused for a second, and then said, “No, I don’t think so.” I asked why not, and he said, “I just don’t really feel comfortable when I can’t see the bottom…and I don’t really like open water swimming that much.”

He has been practicing in a lake once a week this summer, but it’s a quite shallow lake and they stay very near shore. Other than that, he hadn’t done any lake swimming before. Well, the lake this competition was held in (Lake Monona) has a max depth of 75 feet. Yikes.

I didn’t push it and didn’t sign him up. Well, then last week when the course map came out, he saw that the course would run parallel to the shore (still out a bit, so it was definitely still going to be deep, but I guess this fact comforted him). He then decided he DID want to try it, I signed up him….and you know the rest. (Repeated cancellations!!)

Anyway, I knew that even though he said he wanted to do it, he was still feeling pretty nervous about the whole thing. He didn’t say much, but, I knew. It worked out that with the date change, one of his best swim buddies who had been out of town was now back and able to swim it with him- another definite plus for him.

I actually was initially a bit nervous that he might start swimming, freak out and then swim over and get out or something!! Obviously that would be better than drowning, but I knew it would really embarrass him and just be kind of traumatic. 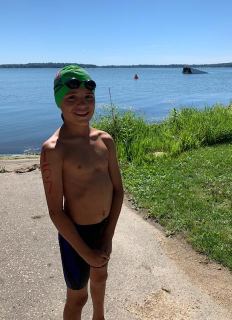 But he did great yesterday. Once they were in, he and his friend stuck together for the most part, taking it nice and easy. (Technically it was a “race”, but since it was a new experience for both of them, the main focus was just completing it/ getting used to distance open water swimming.) 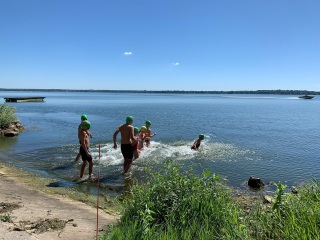 My favorite moment was right at the end though…he was swimming in to the finish line and there was an older boy that ended up right next to him for the last few yards. I could see Asher suddenly get a competitive urge as they were neck and neck to the end. He dug in and swam his very hardest, sprinting to the finish while the older boy practically swam on top of him, then running up out of the water to cross the finish line. I was really proud to see that STRONG finish despite such a long swim!!

I think he was really proud of himself, too. I know from personal experience that sometimes the moments that seem so scary end up being the most rewarding.

The tricky part is getting up the nerve to actually DO whatever the scary thing is! I think as kids, we naturally find lots of these “new opportunities”- through school, sports, activities, etc. One experience that stands out to me was when I was in college and traveled alone to Guatemala to a sister church there. The whole trip pushed me to be independent in a whole new way, and I came home feeling so much stronger and confident than ever before.

However, as adults, I feel like it gets a lot easier to just become complacent and bumble through our mundane lives, following our same old routine everyday. Watching these young kids overcome a big new challenge like this was so inspiring! I think it was a good reminder for ME to be on the lookout for new ways to push and challenge myself, too. There’s just something about overcoming an obstacle that is so empowering.

Pretty sure I will not be signing up to race an Ironman or anything anytime soon (although that is definitely a prime example of adults pushing themselves out of their comfort zone!), but maybe the next time the thought of something new gives me nervous butterflies in my stomach, I’ll try moving toward it instead of away. 🙂

Daily Gratitude:
I am grateful I got to be there to watch Asher accomplish a new goal! I’m grateful for the perfect weather, that the race was rescheduled (and not just cancelled again) and that he didn’t freak out!