Looks like rain, huh? Ah, that’s okay. I’m kind of in the mood for a rainy day. We have had a stretch of some beautiful, hot weather for the most part, and this weekend looks like it will be mid-80’s and sunny too.
Like I’ve mentioned before, Fridays are generally one of my favorite workdays and surprisingly (?) usually one of my most productive days. There’s usually nowhere I need to go, no morning tennis lesson or Asher’s pool time to work around, and by Friday I’m generally more content to just let the kids sort of start the weekend. Not that we have been having tons of real structured time for them anyway, but I’ve been giving them lists of a few educational things to do and whatnot.
So, I’m kind of in the mood to just settle in for a rainy workday to get a lot done before heading into the weekend. The boys do have an exercise class at the gym at 9:00, but normally they bike over. I suppose if it’s raining I’ll need to drop them quick, but it’s like 2 blocks away so no big deal. 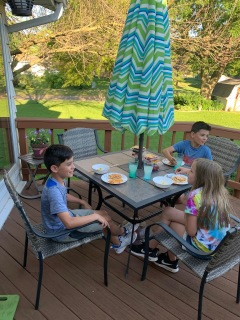 Last night our neighbors were going away, so we kept their daughter all evening. She has been a best buddy of the boys since we moved in here 7 years ago, and we just found out they are putting their house up for sale on Monday and moving back to be near family!! The boys are pretty devastated. They spend hourseach week playing with her, and they play SO WELL together.
She is a bit of a tom boy and fits in perfectly with the boys. I also just really like how they play together- tons of outdoor, active play, jumping on the trampoline, searching for toads, stuff like that…but they also play a lot of imaginative games with her. Together, they make up complicated tag/ make believe games in her tree house, they build huge Lego cities together, they make scooter mazes in the cul-de-sac…they are just very in sync with their more creative play styles and that can be hard to find in a friend.
Sniff, sniff! I am actually really sad about this, too. I have loved that the boys can just run out the door and have an instant playmate. They’ve all taken to just roaming the neighborhood between the various backyards and I had recently been thinking how grateful I am that they can have this more “traditional” barefoot, play-in-the-sprinkler type summer experience.  Fingers crossed maybe another family with kids will move in. Their house is a great set up for a young family especially being on the cul-de-sac, so I’m hopeful.
Anyway, it was a fun night with her here and per their request, we made a bonfire. Another friend that lives nearby ended up joining in too and they played some epic games of tag followed by “ghost in the graveyard” for a looooong time after dark. Plenty of s’mores were had, too. 😊
Some pics from the evening:

5 thoughts on “Let it Rain! And Goodbye, Dear Neighbor :(”