So far, so good on my #75 Easy challenge (more on that here). Day 2/75 complete and on to Day 3 today. The biggest key is not waiting to get started on the various to-do items. In the past, I would wait until almost noon to start drinking my water, or wouldn’t walk OR exercise until later in the day….just a recipe for life getting in the way.

It is best to just “eat the frog” as they say and start knocking things out early in the day. (That was a pretty good book, by the way. I read it a couple years ago. Especially useful for procrastinators!)

I actually have one other newer daily goal that isn’t officially part of the challenge, but I’m sort of tacking it on. A few weeks ago, I decided I wanted to spend less time on social media. As we ALL probably know, it’s a major time suck. I kept feeling distracted and pulled to look at my phone at all random times of the day. This has been an issue for way too long. It just feels…yucky.

But…I do truly like some aspects of social media. Particularly, since almost everyone I know in real life is on Facebook, I always have this sense that I’m “catching up” or “checking in” on what’s going on with everyone. Also, the boys’ sports teams post updates, photos, etc. on there, as does school, other local events and of course, extended family updates (like pictures of my cousin’s newborn baby!!).

This all makes me hesitant to completely cut it out. Life is so busy as is and I already feel out of touch a lot of the time. I guess Facebook gives me a way to at least maintain SOME connection with people that otherwise would just totally disappear from my life. Sad, but true. On Instagram, I mostly just like finding new ideas, books, podcast recs…things along those lines.

So, since completely cutting it out didn’t feel right (and apparently there is scientific evidence that using Facebook will help you to live longer), I decided on the following:

Originally, I set the time limits for Facebook and IG for 40 minutes a day (total, between the two). When the time runs out, my phone blocks my access. (Yes, I could override this, and I have in the past, but I currently feel very committed to this. I’m considering it part of my challenge.)

I’ve been using the 40 minute total limit for several weeks now, and many days it has still been feeling like too much. I will check in multiple times a day on one account or another, and actually find myself thinking, “Jeez, I still have time left??” I took that as a sign that I was ready to cut back a little more, so I lowered the limit to 30 minutes.

This feels like a decent amount of time that allows me a few moments of random “scrolling” throughout the day if I want, enough time for if I want to post something, and still enough to, say, read an article or browse something I found.

I also find that as I use it less, I’m less attracted to it and don’t even really feel the urge to look at it much. Knowing that I have limited time to use it, I just don’t reach for it as often. Some days, if I have used it more in the morning for some reason, and my time runs out by 3 pm, I actually feel a sense of relief, knowing it just won’t be an option until the next day. Maybe sounds weird???! But just being honest.

Perhaps this whole concept makes me sounds a bit pathetic, for “needing” to set actual physical limits on my phone for this. Or maybe 30 minutes on social media per day still sounds like a ridiculously large amount to you. I don’t know. All I know is that it seems to be helping me feel less distracted, and it definitely decreases all of the negative garbage I am forced to consume.

Yesterday’s phone summary. I really don’t care about my “total usage” much, since in my case, the only places I feel I would truly waste time would be on Facebook or Instagram. Everything else generally has a purpose. Apparently I was on Messages a lot yesterday, but the phone tracks any time the screen is open. I had a couple of longer back and forth text exchanges with people while I was doing other things, so this doesn’t bother me at all.
Daily Gratitude:
I am grateful for the kids being back in school. As I watched them get on the bus yesterday, I sent up a huge prayer that this can somehow continue. It has been so amazing for all of us. 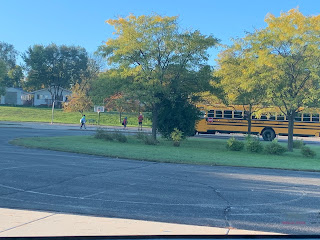 3 thoughts on “Cutting Back”