Well, it’s been a few days now so I guess I have to stop pretending I’m still on vacation and talk about something else. How about….SCHOOL??? Because in the current climate, that’s a fun topic!!! 😊 Hehe.
Seriously though, school talk is all the rage right now around here. Probably everywhere, I’m assuming.
Our local public school district (and I think most surrounding areas) just announced on Monday that for at least the first quarter, school will resume virtually only (which would be through at least November). Of course this sparked major conversation online on our local city Facebook groups…everyone has an opinion, an “answer”, a fact, an article, whatever. Emotions were flying high, as this is clearly a pretty complex and devastating blow to dual-working families (and probably many, many other families for a variety of reasons).
I feel like many people entered almost a state of panic, even though this was largely expected at this point. I think a lot of people felt like the virtual learning just didn’t work for them/their child/their family in the spring and the prospect of continuing this indefinitely is quite terrifying. On the flip side, there are people that think it’s horrible to even consider sending children back to school with the pandemic still going on, and then there are those that fall everywhere in between.
I pretty much just excused myself from those online platforms ASAP (not that I ever comment there, anyway) because the comment section basically turns into a bar brawl within about 2 seconds. 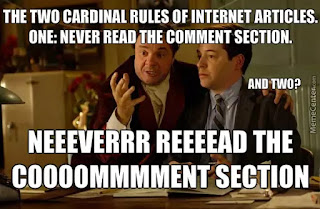 In our case, the boys go to a private school now, which IS planning to open in person. They have been working hard all summer it sounds like working on a very complex plan to meet all local guidelines while still being able to open in person. That’s one perk to a smaller school, I guess- it’s a little easier to shift things around and make it work in one single school, versus a district that has over a dozen schools to figure out.
Our school is also providing the option for kids to go back fully online/ virtually if the family should desire, as well.
In our family we are planning to send them back, assuming this plan moves forward. I think we are supposed to get more details today or this week, so I’ll be very curious to know how it will all work.
The boys have caught wind of a few things so far and they are mostly concerned that they won’t be able to see their friends. Let’s be real- that’s one big reason they want to go back. It sounds like for the boys’ grades at least, they will be splitting them from the normal two classes per grade into three classes (to reduce numbers in each class). I’m kind of assuming that whoever is in their class then will be the only kids they will be allowed to socialize with (again, assuming no traditional lunch time and recess, etc.). So of course the kids are dying to know who is in their class.
We’ll see…I really, really hope they can go back, personally. Although it wasn’t “awful” for us in the spring exactly, it felt like temporary organized chaos and the idea of trying to continue overseeing their learning while working fulltime LONG TERM sounds terrible to me. I really just need them out of the house so I can get back to fully focusing on work, and Ethan especially needs the socialization aspect. He was really thriving at school, socially (as a more naturally shy/ not too outgoing kid), and I feel like he is slipping backwards in this regard now that he has been home so long.
What’s the plan at your house so far for school in the fall??
And just for fun, one more popular meme, which I think pretty accurately depicts what every parent is feeling right now, given that every single option basically stinks in some way currently: 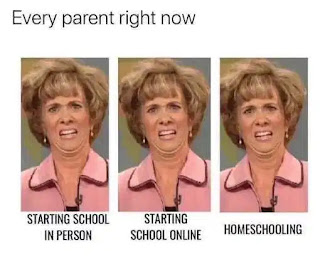 Daily Gratitude:
I am grateful that Ivan offered to go the grocery store last night at 9 pm so I wouldn’t have to go today. I went to bed early and he cleaned out the fridge, got the groceries and put everything away. I’m grateful I can cross that off my list! 😊