YAWN. Sleepy morning over here and kind of a funny one, too.

Last night a couple of Ethan’s friends came over for a bonfire as sort of a mini birthday party with friends- though “party” is a very loose term here, as it was just a small gathering of the boys playing outside mostly. Ethan got a bunch of water guns and water balloons for his birthday from my mom, so they tried those out and also had a big Nerf battle. Later, Ivan grilled hamburgers and I made sweet corn and they played nighttime yard games and had s’mores. 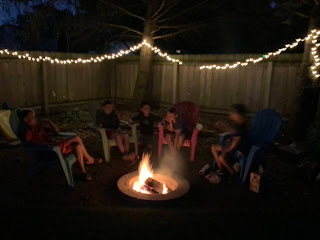 It was all fine and dandy until they were out in the front riding scooters (after dark) when one of them found a little dog running around, collarless. There was no sign of an owner looking for her, though she was clearly well trained and well groomed- definitely not a stray. 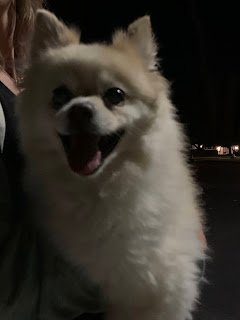 The boys were all SO EXCITED and the poor thing was probably overwhelmed by everyone clamoring to hold her, all talking on top of each other. I could barely think straight about what to do- why are boys in groups so loud?!- but after wandering around our street for a bit and not finding anyone looking for her, we took her to our backyard and I called the police line. Unfortunately, no one had called in yet.
I ended up agreeing to keep her for a bit to wait and see if anyone would respond to my “Found Dog” Facebook posts on our local city pages. We even drove around the neighborhood to see if we could find anyone out searching for a dog, but nope. By this time it was after 10 pm though! Also, this dog, while extremely sweet and friendly, was shedding like nobody’s business! My black tank top was literally covered in dog hair….yikes.
We don’t have any pets (not counting the hamsters, who do not shed 😉 and anyone who knows us knows this: Ivan is VERY anti-dog hair. It’s not that he doesn’t like animals, he just really, really despises dog hair, to an almost exaggerated level. I mean, I don’t love it either, but he REALLY can’t stand even a single bit anywhere on him or his belongings. I’m not entirely sure what the huge issue is, but he has been like that ever since I’ve known him. 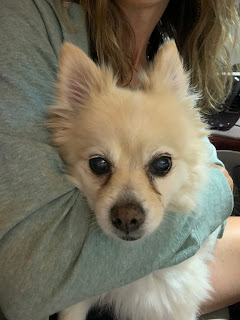 He didn’t even want me to bring her in the house, but it was cool out last night and I wouldn’t have left her out there anyway. I promised I would not let her down or loose in the house and I blocked off our main bathroom and set it up with a bed and food and water.
Getting her situated, fed (she was super hungry! I had no dog food so just mixed some white rice with turkey pieces and she seemed to be in heaven and gobbled it up), water, and let out, all while compulsively checking the FB page for updates just took a long time and it got super late. It was after midnight when I was finally getting to bed and my phone rang! 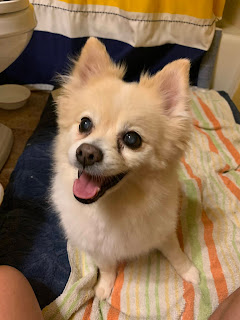 The owners had been out all evening helping a friend move, and got home late to find their screen door open. Apparently one of their kids stopped by to let her out and forgot to close up. They just live a few streets away and came right over to get her, at like 12:40 a.m.! Hence, the big “YAWN” at the beginning of this post.
I’m glad we were able to reunite her with her family. She sure was sweet!! Just wanted to snuggle up in my arms and have her head stroked. 🙂
Anyway, that was our adventure for the night. Now, I hope to have a very boring, adventure-less day, because so far this week has just felt very chaotic and distracting in many ways to me.
Daily Gratitude:
I am grateful for my best childhood friend. It’s her birthday today. She lives in another state and I actually haven’t seen her in years now, but we were thick as thieves from 4th grade on through high school. I often think how grateful I am for her, because she made up a HUGE part of my childhood and it would not have been the same without her. I feel so lucky that I found such a perfect match in a best friend for all of those important years- I know not everyone does. We are still in touch, though sadly not too often anymore. I always remember her birthday though, July 23!