We’re closing in on the 4th of July already! 2 days to go. It’s kind of nice I guess this year because it falls on a Saturday, which means I get a “floating holiday” to use at some other point. I think I’m just going to work tomorrow (the 3rd) because Ivan has to work anyway…so I’ll probably just save it for another time. Too bad the actual festivities on the 4th are going to be sadly very different than other years.
I think I mentioned already this week that we are having some HOT weather around here. It feels like summer for sure!! Yesterday I sat out on the deck early in the morning and made up that new habit tracker I shared yesterday and it was gorgeous, but by the time Ivan and I went for a walk around 7:30 a.m., it was already heating up! The boys and I had breakfast on the deck too before it got too hot. The deck boards in the shade were still cool, so they took turns bringing the hamster friends out to play while they ate. 😊 Always entertaining to watch the little guys.
During a late morning break I got out to water my  garden quick…with the heat it feels like everything dries up in an instant! I have lots of green stuff growing!!! Fingers crossed I actually get some decent veggies this year. I’ve had good luck so far with my little lettuce plants, the cilantro has been growing well and I can see peppers forming and radishes starting to pop up. 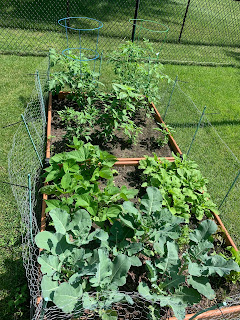 The only downside to the heat is that the boys literally start melting and “just can’t” (their words) be outside too much at one time. Ethan especially is NOT a big fan of extreme heat. They used it as a pretty good excuse to lounge around watching a movie for much of the late morning (“in the air conditioning, Mom!”), but whatever. Honestly, it is super hot this week. Like 90 and humid. I was out for 15 minutes and came inside just dripping!
Asher had a Zoom Band (drum) lesson at 1:00, so after that they did take our new sprinkler out and got it set up. We had run out on Tuesday looking for a new slip n’ slide, but we had NO luck in the couple of stores we checked! Theirs broke and they’ve been wanting a new one. Guess we shouldn’t have waited until the hottest week of the year, in July, in the middle of a pandemic when everyone is at home and is wanting home entertainment. #momfail 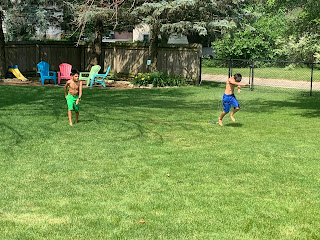 I needed a regular old sprinkler anyway for watering a newly seeded area in our front lawn, and fortunately we were able to find one of those. I told them I think all I ever had was a regular sprinkler to run through as a kid and that I never saw anything wrong with it…. Isn’t the point to cool off??? They had a good time although maybe the fun wasn’t quite as long lived as if they’d had the slip n’slide.
Today looks like probably more of the same. I feel a little guilty that I’m not able to take them to a pool or a lake or something during this perfect week for it…There’s no better pool weather than this! But alas, I have to work. I guess I COULD take my holiday day, but I feel like I’d rather save it for a family day or something.
I suppose I could maybe take a half day tomorrow and take them to a little beach or something. Hmm. I’ll have to think about it. For today, the good old sprinkler plus the ice cream sandwiches that are in the freezer will have to do. 😉
Daily Gratitude:
I am grateful for sprinklers! I had been watering this new grass in my front yard by hand which was just very tedious and time consuming. I have no idea why I hadn’t picked up a new sprinkler before, but, I hadn’t. I am grateful that I have one now to water my new grass, and that it doubles as a fun way for the boys to stay cool.