It’s Father’s Day today.
I’m going to be honest here. I love, love, LOVE the Dads in my life- my husband, my own Dad and my father-in-law- and they are all so very worthy of celebration, but when this day rolls around, part of me is always like, “oh man, another holiday I’m supposed to buy a gift for.”
Ivan is IMPOSSIBLE to buy gifts for. He tries to deny it, but it’s just the truth, plain and simple. He just isn’t really a particularly “needy” type guy, in the sense that he likes to receive a lot of “stuff”, to start with. His main hobby is soccer- he loves playing it, watching it, anything soccer.
But, soccer is kind of a terrible “gift buying” hobby for a grown man. I mean, what can I buy related to soccer? New socks? I don’t even really know what kind he likes. Shin guards? Maybe, but his seem to be working fine. New shoes? Even harder. A ball? I guess, maybe, but he already has one and they last a while too.
He isn’t a really handy type guy who likes to do home projects much, so tools and stuff like that are generally out (though sometimes it’s still a “useful” gift, IF I even know what to buy…). As I discussed in this post, he isn’t a reader.

Clothes are tricky to buy him because a) he tends to take really good care of his clothing and doesn’t need to replace it that often and b) he’s really funny about materials, fabrics and stuff “feeling” a certain way, so more than half of the time at LEAST he takes back any clothes I buy him. He tends to buy his own clothing when he needs it, gets what he wants and that’s it. He drinks coffee, but nothing fancy or special. He likes the mugs we have already. He likes to get new tennis shoes, but those are kind of hard to buy for someone else too, and he has a lot already! And on and on and on.
I’ve done new baseball caps, sweatshirts, PJ pants…I’ve tried cutesy things like framed pictures (but he isn’t really too into photos and stuff like that)… I’ve done gift cards… new backpacks for soccer… once I bought him an electric toothbrush (he didn’t return that, so I guess that was a win).
Anyway, long story short, I just dread buying him gifts.
With the Amazon app on his phone, pretty much anything he really “wants” or “needs”, he just buys himself! Like I said, he is generally pretty minimalistic in terms of wants. He doesn’t buy a lot of “stuff” just for the sake of buying stuff.

The things he spends on tend to be bigger items, like wanting a newer, bigger TV. Or really nice, more expensive sunglasses. Stuff like that. But then because he tends to purchase more ‘investment type’ items, they last a long time! Or, he buys very specific items that I would have no clue about, like some specific kind of electric razor or something.
Anyway, I was kind of saved by the bell this year because he just bought (himself) a new bike, after years of not even having one. I think for the last THREE Father’s Day I said, “I’m going to buy you a bike for Father’s Day!” But then I never did. I figure that for the price of the bike, this is now basically covering the last 3 Father’s Days. 😊
On the plus side, my own Dad is slightly easier to buy for (I say slightly, because he is pretty hard to buy for too!!!). But I do have a gift wrapped and ready to go for him at least.
Here’s a few pics of the special guys in my life:
My Dad and me in front of Delicate Arch in Arches National Park last summer. Plus, a very cool Grandpa rappelling down a 125 ft cliff with us! 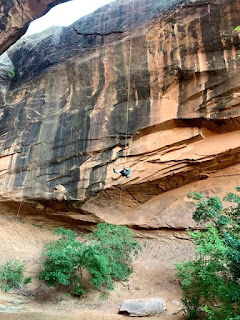 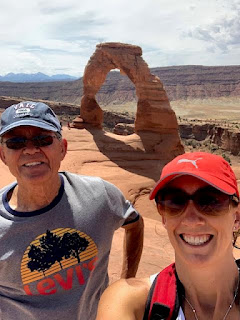 This one is a favorite of Ivan and the boys. They just love doing dangerous stuff like climbing on really tall rocks having fun with him! 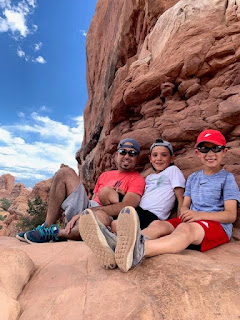 My smiley father-in-law on our visit in March! This was in the town of Metepec. The second pic is just a sweet moment I captured while we were visiting Ivan’s grandma (my father-in-law’s mother) in Mexico City. 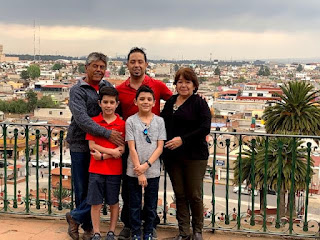 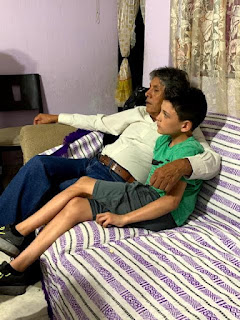 Daily Gratitude:
I am grateful for my Dad! I’m so grateful for Ivan and the amazing father he is to our boys, too, but since it’s FATHER’S DAY, it always feels most relevant for me to focus on my own Dad. He is just out of this world. I don’t even have words to describe how much I love my Dad. He is the most amazing person, father, husband to my mom, grandfather to his grandkids….My heart literally explodes with gratitude every time I am with my Dad.

4 thoughts on “I despise buying gifts for my husband….”