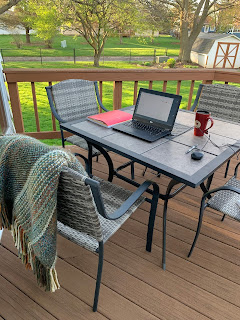 This is a first of the year…I am actually sitting out on our deck on our patio furniture! I’ve been able to use the deck a little bit on a few other nice days this year, but we finally got the patio furniture out yesterday.
It is a beautiful morning on this Sunday. It could be about, say, 15 degrees warmer right now and I would be A-okay with that, but I’ll take it. 🙂 My phone says it’s 54 degrees right now. With a blanket, slippers and my hot tea, I’m not too cold and with the sun peeking up over the houses and the birds singing away in the trees, it’s just too beautiful to miss.
The neighborhood is so quiet right now, since it’s early Sunday morning. These are the moments I literally live for!! It’s just me and a lot of birds, squirrels, rabbits and oddly enough, an enormous GOOSE was just sitting up on top of my neighbor’s house! We have a big pond nearby where there are tons of geese, but I’ve never seen one just sitting on top of a house before. He was looking all around for over 5 minutes, just sitting there, and then starting honking and honking, acting a bit distressed. I don’t know if he got separated from his pack and was looking for them or what! It was strange yet very interesting. He finally flew away.

So, I was going to talk about my issues with meditation, as I mentioned yesterday, but I’m not really feeling that today. Instead I think I just want to share a few random things that I’ve been loving this week, in no particular order.

1. Warm weather
We have had a nice little stretch here the past few days. (See photo above for my deck/office set up this morning). On Fridays, the boys usually have a lighter school load. Everything is “due” at the end of the week, so they usually have already completed the majority and just have some miscellaneous items to finish up or work on. As a result, I’ve been finding Fridays to be one of the nicest and also most productive work day for me, since it’s just lower key with the schooling stuff. (Many of my co-workers wanted to have Fridays off as their “flex” day off but I specifically said I want to work Fridays….)
This past Friday I took an hour on my lunch break and we went on a long bike ride on a path nearby. It was beautiful out and it was wonderful. 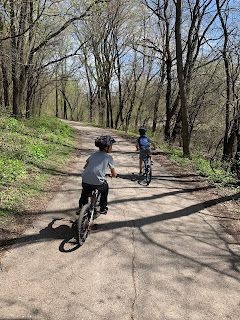 2. An Alan Walker piano video Ethan found
A few years ago, my then 15 year old brother-in-law came to visit us from Mexico and introduced the boys to a Norweigan DJ/ artist named Alan Walker. When I first saw him, I’ll admit I was skeptical and assumed he was some up-to-no-good punk youngster or something. He dresses in all black and wears a hoodie and a face mask covering most of his face (all the time, not due to the pandemic!). 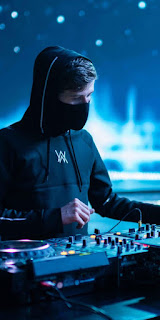 Well, I actually stand corrected (and apologize to him for momentarily judging him without knowing anything about him….) because after I did some investigating, I learned he seems really cool and very talented. His music is kind of an electronica style. He doesn’t sing (though he has singers in the group) and he does mostly keyboard and the like “mixing” or whatever you call it when you make cool sounds on the DJ boards. (I clearly have no idea about this really).
I learned in an interview about him that he wears the face mask because he wants it to symbolize that all people are the same and are equal, and that it could be anyone behind the mask achieving great things. He has said too many artists “make it big” just due to their appearances and he wants to be recognized for his music alone, preferring for the audience to just listen and focus on the music, not on him.
How about that! Pretty profound (and unique) for an early-20’s something kid. He has turned into a worldwide phenomenen apparently and is extremely popular. His music is really cool too and all of the lyics I’ve ever heard are perfectly clean. The kids love putting on his You Tube channel if they workout in the basement.
If you have kids around my kids’ ages, check him out if they are into music or like watching You Tube videos! His most popular hit is a song called “Faded” (live performance below). There is a long intro so skip ahead to around 1:30 if you want to when the melody starts.
Ethan also found this AMAZING video last week of an extremely talented young pianist performing a cover of Alan Walker’s “Faded” at a mall in London. This kid is incredible (and has an awesome You Tube channel!!) and I also absolutely love to see young boys/ men doing cool stuff with music and/or the piano. I think it’s super inspirational for my boys to see that there is more to music than just practicing scales or playing a stuffy old Mozart Sonata (although I adore classical music). Seriously, check it out- this kid is awesome!
3. “Beyond the To Do List” podcast episode about distraction
I wrote a blog post a while back now about the book Indistractible by Nir Eyal and how much I loved the book and some amazing tips I got from it to improve focus. (See post here – same post I linked yesterday with the Focus app).
Well, last week I was listening to a podcast I like called “Beyond the To Do List” with Erik Fisher. He replayed an episode from when the book Indistractible first  was released when he interviewed the author. They break down the book and really cover all of the major points from it. It’s a GREAT episode and if you ever struggle with staying focused or on task (or if your kids do), I would highly, highly recommend checking it out! I have the book and love it, but this podcast episode is a fabulous introduction to the tips in the book and I promise you’ll learn some good stuff!! 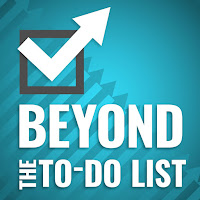 Check it out here: Podcast Episode  or visit the Beyond the To Do List website here for more about the podcast in general. It’s another one of my absolute favorite podcasts that covers habit formation, productivity, time management, etc. I always learn something.
4. Math Puzzles
Just throwing this in here for fun, because why not. So, my wonderful Dad (now retired) spent his career as an electrical engineer. He is what you might call a bit of a “math nerd”. He ran across some math puzzles online and decided to try to make a couple of his own. He sent them over for the boys to work on, which they did. It was a fun challenge and I even had fun taking a little brain break and working on them. The boys completed them before I did!! 😬 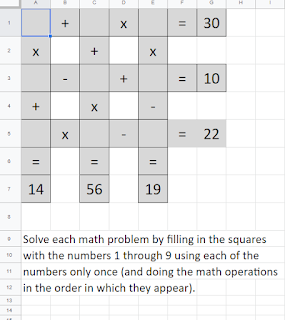 Give them a try or give them to your kids! I think one of them has two possible answers (that was his first attempt at making one) but I can’t remember now which one it was.
5. A flowering bush in my yard 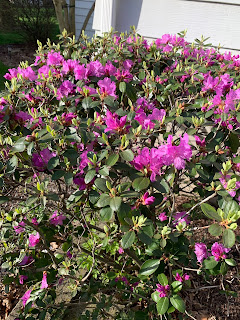 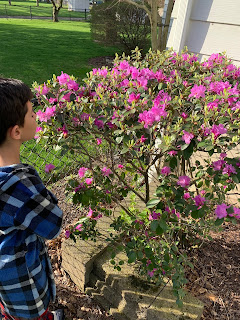 Unfortunately it is around the side corner of the house so I can’t really see it from any windows. I caught a glimpse of the edge of it from the sunroom so Ethan and I just walked out there to take a look. It’s so pretty! Ethan is smelling it, in his bathrobe. 🙂
There you have it. Some random things that brought me joy this past week! On to enjoy this beautiful day before some cooler weather moves back in… Boo hoo.
5/2:
Steps: 10,686
Meditation: Done!
Read: 20 minutes
Daily Gratitude:
I am grateful for the seasons. I think about this a lot. I really, really like living somewhere that has 4 distinct seasons. There are things I absolutely love about all four of them and I would hate to miss any of them, really. Spring is generally my least favorite, just since it’s not that great in Wisconsin (oftentimes cool and windy). But we do get some glimpses of beautiful spring days here and there eventually, and I find there is just such immense beauty in enjoying the uniqueness that each individual season brings! The HOT summer days feel amazing, the crisp autumn air and beautiful changing leaves are probably my favorite, and of course, the quiet, glistening snowfalls in the winter are always surreal!

2 thoughts on “Some Things I’m Loving on a Sunday”