I really feel like this week is flying by. The boys have piano lessons on Thursdays and I feel like it was just Thursday, and now it is going to be Thursday again tomorrow already. Yikes. I guess time flies either way- when I’m really busy, or when I’m really not.

I had my half day off yesterday which was nice and today is a full day off. I didn’t do anything of much significance yesterday, really. I ended up “sleeping in” and it reminded me why I just really don’t like doing that anymore! I felt sad that I missed out on my usual morning quiet time. But, I had stayed up way too late on Monday night, and since it was a rest day on my workout program, I decided I needed some extra sleep.

I got my 3 Things done yesterday which were:

-read a couple pages of Usborne WWII book with the boys and watch the corresponding videos online (we watched an old video of Hitler and the Nazis as they entered Austria in 1938, and another of the British Prime Minister Chamberlain giving a speech about how he had had a “really good talk” with Hitler and he felt like they now really “understood what each other was thinking” and how he felt optimistic going forward. Hmmm… how’d that work out, buddy??)

-have lunch out on the deck (NOT at my desk!)

I also assembled a new pole lamp that I had ordered for Ethan’s room which arrived yesterday. Due to the new hamster cage, I had to relocate a lamp in his room, creating sort of a big dark corner. The pole lamp did the trick! 🙂

I ate a bit later lunch, as did the kids…and then it turned out that Ivan was going to be getting home later than usual last night, so after I worked my half day (in the afternoon) I loaded the kids up and we drove over to Culver’s.

My mom had sent the boys each a $5 giftcard to get some custard a couple weeks ago, just because, and they had been itching to go spend them. So, we decided to push our chicken dinner plans off until today and have custard for dinner! I got a Turtle sundae- something I hadn’t had in probably years– and it was delicious. It was a beautiful evening too. Culver’s has carhop service in the evenings, so we rolled down the windows and I played the Beatles station on Pandora and we pretended it was 1965. 😊 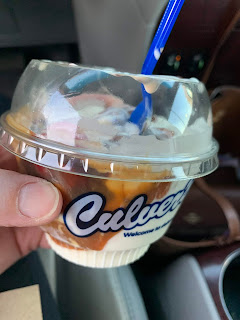 Today’s plans….I still need to figure out exactly. I have the day off, the weather looks beautiful, the kids have school. I am feeling like I should get started on scraping paint off our deck rails to start prepping them to repaint. We have tall perennial flowers that grow up behind the deck and once those really get going it becomes difficult to even stand back there in the flower bed to work. Also, bees and wasps like to nest underneath the railing, so I really don’t want to push this job off much longer into upcoming hotter weather! I would rather continue working on the storage room which I started last weekend, but ‘practical me’ knows the deck job should probably take priority.
The weather is (finally) looking like a warm up is coming, so that is some other exciting news! Of course it would need to rain over the weekend, but I spy an 81 degree temp next week!! 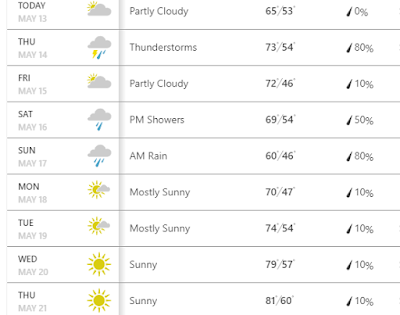 I would like to maybe go on a bike ride with the boys at some point and hopefully read my book outside for a little bit. I’m reading a fiction book called Most Wanted about a couple struggling with infertility that finally achieves pregnancy using an anonymous sperm donor, but they then find out their donor may actually be a newly arrested serial killer. It is turning into quite the dilemma for this poor couple.

Oh, and Asher has decided he wants to start his own You Tube channel. I have no idea exactly what he wants to broadcast on this channel, but he was begging me last night to help him figure out how to set it up. I’m assuming something related to Minecraft or video games. Apparently I need to start by making him a separate email account. I promised him that we could look at it today. Kind of just sounds like something else I will need to monitor and keep tabs on, but, at the same time, I like the creativity!
How’s your week going? What’s up at your house on this Wednesday?? Anyone have a You Tube channel and want to give me some pointers? 🙂
5/11:
Steps: 10, 138
Meditate: Done!
Read: 15 minutes
Daily Gratitude:
I am grateful for some new pens I am using! I have to write a lot (by hand) for work, jotting down notes about patient data, and I used to use just any old pens. I was using the cheap, plastic Bic pens I would grab from work! I found my hand was starting to hurt and it just wasn’t a pleasant experience at all. Plus, when I started writing my “highlight journals” by hand (read about my journaling system here if you missed it), I wanted a nicer writing utensil! I bought some higher quality pens for myself earlier this winter and have tried out a couple different styles. The ones I am liking the most right now are the Tul gel retractable pens. I have a 12 pack and they just feel so lovely to write with! 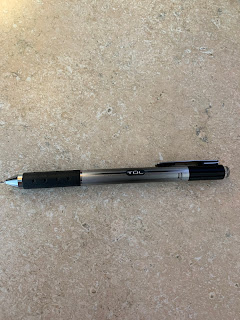