Oof. It is the weekend, but instead of feeling refreshed and ready to relax, this morning I feel a little bit like someone who was shipwrecked, had to swim 3 miles to shore, drag himself onto the beach and then realized he still had to build a fort out of banana tree leaves and try to start a campfire.

I am being very dramatic, so don’t pay too much attention to me over here. 🙂 I didn’t have a terrible week or anything, as evidenced by my perky 5 positives list yesterday! Ha. I think I just feel a wee bit tired out at the moment. The school days/ weekdays just tend to feel hectic.
After my early morning alone time and workout (arguably one of the best times of my day right now), the days seem to be a revolving door of school-work-question about school-work-question about something really weird and not school related-snack-work-work-make lunch-help with math that I don’t remember how to do- work-help figure out why the Zoom meeting isn’t working-work-and so on and so forth.


Like I mentioned yesterday, overall the kids are doing awesome with the online schooling. Honestly, they have actually impressed me. They’ve been really quite self-sufficient and have been surprisingly positive about it all (overall- let’s not get carried away). But with me home all day, I inevitably just get pulled into a lot of randomness throughout the day. I therefore have been working late into the evening most days, which is fine and works out well, but makes for a short evening then to unwind and just sort of extends the whole process.
I am also missing my nice, quiet, empty house for long stretches during the day to just work in peace while they are at school. I love seeing the boys more- I really do- but again, it makes the day feel fragmented and just sort of dizzying sometimes.
We don’t really have much on the agenda this weekend except I do want to work a few solid hours to offset a couple of the hours this week that ended up being less than ideal on the productivity scale. Ethan has a fairly large project about Leonardo Da Vinci that apparently is due on Sunday (? seems like an odd due date) that he needs to finish up, and I want the boys to clean out their closets. I might try to start chipping away at a couple small items from that master 20 in 2020 list (outlined here and here if you missed it).
The Great Bedroom Shake Up
Ethan has been spending some time doing schoolwork on his bed instead of at his homework desk. I’m not entirely sure how I feel about that, but I guess if it works for him, I’m okay with it. He decided the other day that he no longer liked the layout of his room. His bed extended out from the wall in the middle of the room, eating up a lot of the floor space. He has a fairly small room to begin with, so he had a point. As a result, Thursday evening we spent a couple hours completely rearranging all of the furniture in his room. He was super excited about this when it was done. We threw a bunch of stuff away and just did some general de-cluttering too. 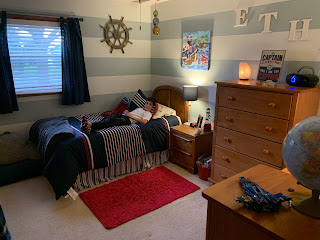 This is the after photo. He now has more floor space available and it just feels a lot more open than before. Next on the list to do in there is to get some new decor for him at some point. We did this pirate theme back when we bought the house when he was in kindergarten! We never have really updated it since. Some of it is still okay, but the kiddie painting above his bed definitely has to go! We also want to get new carpet sometime relatively soon for both of the boys’ bedrooms. I can’t stand this carpet.
I remember I used to LOVE rearranging my room when I was a kid! Must have just been the novelty, I guess. I recall wanting to do it all the time and it drove my parents nuts.
Sure enough, while we worked on Ethan’s room, Asher started whining that HE also wanted to rearrange his room. (When I told him to buzz off, he went in the other room and then started texting me to ask if we could rearrange his room.) We actually just did rearrange Asher’s room in December when he got a new desk for his room! But he kept insisting that he wanted to change it again, despite not even really having too many different layout options due to the window placement in there.
But being the sucker that I am, I went ahead and helped him do a minor reshuffle of the furniture yesterday afternoon. I guess it was enough to do the trick and give him a “slightly” fresh feel.

The rest of the end of the week was pretty uneventful. I did put Asher on the job of making a loaf of banana bread since we had a bunch of bananas that were starting to go bad. My Dad has a really great recipe that we all love. I’m sure everyone has a favorite banana bread recipe, but if you don’t, try this one!! It’s so good. 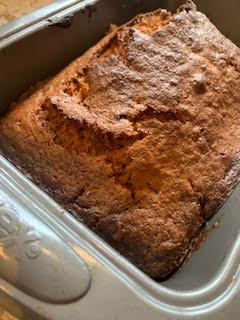 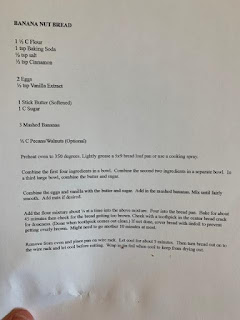 I worked later into the evening last night after Ivan got home to make up for the time that I was off “teaching” yesterday (I spent way longer than I care to admit trying to remember how to do Operations in 4th grade math. I completely forgot about the PEMDAS rule- Parenthesis, Exponent, Multiply, Divide, Addition, Subtraction. I was definitely doing the calculations in the wrong order at first.)
The boys wrapped up their day with a good home workout. Asher did some strength training and running (he writes out his own workouts sometimes and types them up on the computer- it’s very cute). Ethan did a workout sent out by the soccer club part of which involved hopping up and down on stairs. 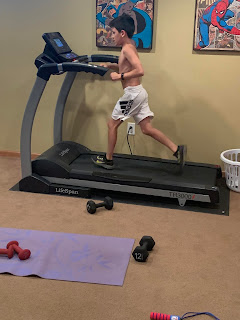 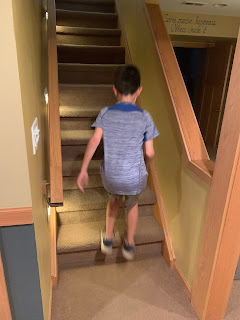 Have a great weekend everyone! In closing I am going to share the quote of the day from my daily calendar- it supports my love of waking up early! 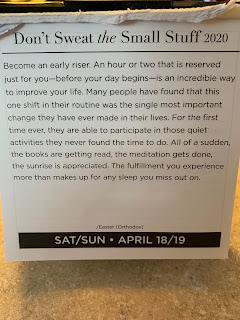 Daily Gratitude:
Today, despite the image I just shared above, I am grateful for the opportunity to sleep in a little bit today! I love the early morning hours, but last night I opted to stay up late and watch a show with Ivan after the kids went to bed. Life is about trade-offs and balance! I had a nice time doing that, and I’m grateful that I was then able to catch up on a little sleep this morning.

6 thoughts on “Weekend Misc. and the Great Bedroom Shake Up”