Is it just me or are the weeks kind of flying by all of a sudden? At first this time seemed to drag on, but suddenly it seems like the days are just zooming by. Maybe we are just settled into routine now which is making time feel like it is passing more quickly.
I had my first half day off on Tuesday and the whole day off yesterday for my required “flex off” time. Besides the minor detail that I didn’t get paid, it was actually very nice! It was cold and rainy, but I was kind of in the mood to just stay in cozy mode with slippers on anyway. Asher and I lit a scented candle while he worked on his math and Ethan read on the couch with a blanket.

I got a bunch of random stuff done around the house. I finally cleaned out my two drawers that hold all of my workout clothes. They were overflowing and were in bad need of some purging of old worn out items, plus just some major reorganizing. I cleaned out a big junk drawer in the kitchen that has been driving me nuts. I reorganized some of our financial tracking system yesterday to make it easier and less time consuming to track and manage our various accounts and expenses throughout the month. I spent a long time helping Asher learn to use a protractor (I’m no math whiz, but I was always pretty good at Geometry actually). And, I got in a solid practice session with both boys on the piano yesterday afternoon. I used to sit and practice with them all the time when they were younger, but now I really rarely have time. I know it helps them a lot since I can correct and point out things as they go, but it just never seems to fit in really as much as I’d like. So I was excited about that. When they were done practicing, I also took some time to work on the new “Bohemian Rhapsody” sheet music I bought recently, which was really fun to play.

I listened to a very thought-provoking podcast episode the other day on the “Edit Your Life” podcast and wanted to share in case anyone is interested (site website here). (Of note, it was recorded just before the pandemic- so it is also a bit refreshing in that there are no COVID-19 references within it!)

The episode title was “Finding Middle Ground in Parenting” and the hosts interviewed a psychotherapist about differences between men and women when it comes to how they parent. I found it really interesting! He talked a lot about how girls and boys are socialized differently from young ages (the episode does include some generalizations, but the hosts are very forthcoming about this) and how this later affects how moms and dads end up feeling differently about parenting (and acting differently!).

You should be able to listen here (or just search in Apple Podcasts):

Episode 197 of Edit Your Life 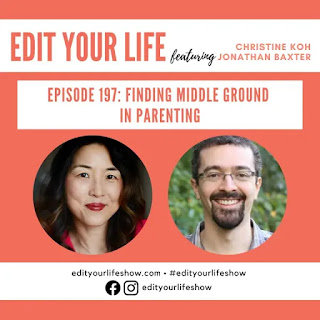 A few points that I found intriguing:

-women are typically socialized early on to be more interested in what is happening in the group (think back to middle school and girls constantly looking around to mimic their peers -“what is everyone else doing? do I fit in?”), whereas men are socialized to be more focused on themselves/ personal achievements and individual needs (“did I score a goal in the soccer game?? I’m so awesome!”).

-women learn to pay more attention to comparing themselves to others even as mothers years later (especially in regards to how they parent- “am I doing enough for my kids? are my kids missing out? So and so is going to space camp, should my kid be going to space camp??” etc.) whereas men many times just don’t even really necessarily think about their “identities” as fathers that much. It’s part of them, but doesn’t consume them in the same way as it does for mothers. They also stated that research supports the fact that men just don’t really experience “FOMO” (fear of missing out) nearly as much as women do.

-My favorite part was probably the last 25 minutes or so of the episode- they delved into the topic of balance and equality within the household between partners (chores, parenting, etc.) and what “fairness” means.

-One point I really liked was that it isn’t actually necessary to have everything be equal in a relationship. It can be better to focus on creating a system that feels balanced for both partners- even if maybe it isn’t, technically.

They talk some about how taking some time to evaluate strengths/ weaknesses in a relationship and taking mutual ownership of the household can be really beneficial. Even if one person might end up “doing more” than another, if it is a mutual agreement that works to the strengths of each partner, it may still be the best option for that household. Doing more of something that feels easy or more natural to you may ultimately be less draining than keeping everything perfectly “even steven” but having to do a bunch of chores you despise.

He did caution that the WORST situation is having one single person be the “parent” of the household while the other person just kind of offers to “help”. They discuss the importance of people taking actual ownership for whatever they are in charge of in order to not breed resentment.

Anyway! Very interesting overall I thought. Check it out if you need something to listen to today!

How do you divide up tasks at your house?? I’m out of time and space to share more specifics of my household personally, but I’d be super interested to hear what others do.

Daily Gratitude:
I’m grateful that I had the chance to just sit and focus on the boys for a while and help them practice piano yesterday. I really enjoy being part of that but I just don’t always have the time. I was glad to have an uninterrupted chunk of time to devote to that yesterday.