Ay caramba. My Monday yesterday went down the toilet quickly. It wasn’t even technically a “terrible” day where so many huge things even went wrong.

The day just didn’t work.
Let’s see. It started out nicely…I woke up on time, got my morning routine in…But that’s kind of where it stopped? I got wrapped up in some emails, and since this blog is new for me, it took me longer than expected to get yesterday’s post up and presentable (presentable to whom?? I don’t even know if a single person has read this yet, besides me!)
That means I didn’t get my work out in, so I didn’t shower as I normally do, since I would presumably work out later (spoiler alert: I didn’t). I took our morning daily walk with the kids (win!). We tried to get going on school, but it took almost an hour for us to sort through the onslaught of new assignments and emails from school. 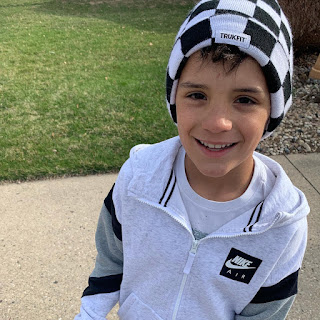 We did get our 10 minute morning scooter walk in before school which was honestly one of the few perks in the day
I am glad they are now sending the schoolwork in one “big batch”, I really am. (Last week assignments trickled in and that was even worse). But the reality is then that we need to spend quite some time sifting through it all on Mondays, making a plan, figuring out due dates, etc. It just seemed to take too long and I wasn’t mentally prepared for it.
When the boys finally got going, Asher seemed to have questions every 5 minutes. The late start also completely messed up our schedule. For some reason, Asher couldn’t print something from his laptop that he needed to, so I spent what felt like 45 minutes trying to figure out why. (I eventually prevailed!) Then they had Zoom “music classes”. Zoom was not yet installed on Ethan’s laptop (I should have realized this over the weekend, but, I didn’t), so that took more time to set up. They had the Zooms at different times (during time I wanted to be working, and they seem to need my help to log in yet and find the meeting invite since it is in my email usually…)
The icing on the cake:
By late morning, I also received an email from work saying that all non-clinical nurses should expect and prepare to be re-deployed to essential areas at any given moment as our area prepares for a potential and probable upcoming surge. Meaning, I very well may be summoned to go work “on the front line” as a nurse. I haven’t done patient care in over 4 years now, and the logistics of doing it now with Ivan working outside of the home as well, plus the kids home alone with no one here to help with school…not to even mention the stress of actually doing the job, in an unfamiliar clinical area, with rusty skills, in the middle of a pandemic… Yeah. Psssh. A big part of me feels obviously called or obligated to help in any way that I can during this nightmare, if I’m able. But I also really don’t want to. 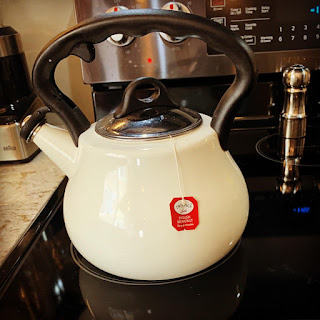 My cute new tea pot I got for Christmas!
I finally sort of gave up, took a shower, told the kids they had done enough, made a big pot of tea and proceeded to work until 10 pm last night. Ha. That was the unfortunate reality of the situation. They played some video games in the afternoon for a while, Ivan was home early and fortunately mostly handled making dinner and I successfully completed all of my hours and work for the day. 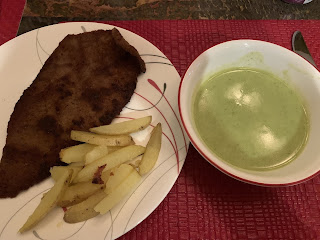 Steak milanesa with homemade fries and cream of zucchini soup
A bright spot in the evening was this dinner though! Ivan made the breaded steak and fries (and a delicious salsa), and I quickly made the “crema de calabaza” (cream of zucchini). This is one of Ivan’s favorite all time meals from growing up in Mexico. You cut the steak into strips and eat it in a tortilla with spicy salsa on top.
We just had crema de calabaza when we were in Mexico and the kids were surprisingly obsessed with it! It is seriously delicious, although it doesn’t photograph so well. Haha. (Usually it is served with those little oyster crackers on top, but we were out of them!! Disappointing.)
Here is a pretty similar recipe to how I make it: Crema de Calabaza soup
Daily Gratitude:
I am grateful for hot tea in my life! A steaming cup of black tea to start my morning is just right, and it is a welcome ‘pick me up’ later in the day to soothe myself with.