I am having a slight dilemma.

I keep going around and around in my head about how exactly my days should look during this time. I mean, I don’t exactly have full control over a lot of things, since the school and work time are sort of dictated for me during the week. But I do have some flexibility in terms of scheduling, and there is the fact that we don’t have swim practices or soccer games or really anything to go to.

So I keep scratching my head as to why it has felt like I actually DON’T have lots of extra time right now. As I have said in previous posts, I have been the primary parent responsible for helping with the kids’ schooling. This of course takes up time, and then there is the full time job too. But I can’t help but feel like with absolutely nowhere to go the rest of the time, I should be having more time for certain things than I seem to!

I feel like I basically either am dealing with the kids, working or lounging around. (I realize this really isn’t accurate, but it feels like that lately). I know the days are long juggling everything, so I’m trying to cut myself some slack. But when I go for walks, I see all these people out cleaning their garages or working in their yards. I see people painting cute little rocks on Facebook. I know one family that just had a themed costume party night with their kids (with very elaborate costumes!).

Yesterday was Saturday, and I just really didn’t feel motivated to do anything. I did some work, I went for a walk, I cooked lunch, I did a little financial housekeeping checking up on a couple of our accounts. The kids played outside for a really long time. But in the afternoon, when I did have a chunk of time, I had no motivation to actually work on any household projects or anything.

This is what I did: 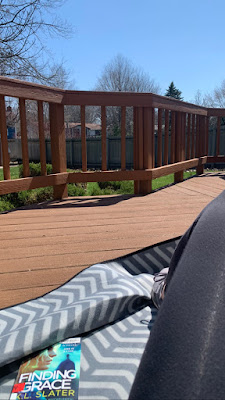 I sat my butt on the deck in the sun (and a lot of wind, but never mind that) and read my book. I had many other “productive” things that I could have/ should have done, especially since it has felt impossible to really do too much during the work week besides school and work.
I keep feeling torn between trying to utilize this time to “get things done” and utilize this time to “relax and lounge around”, since when on Earth do we ever have time to just sit around and relax in “normal life”??
But then on the other hand, I feel like- ‘my goodness, if I can’t clean out the storage room when I’ve been on house arrest basically for a month, when will it EVER get dealt with when normal life resumes?? I need to get going on some of these things! We should be taking advantage of this down time!’
You know that saying “if you need something done, give it to a busy person?” I really honestly believe that is true. I think the less busy I am, the less efficient I become. I remember thinking about this when the kids were little. When I have a million things going on, I feel weirdly more capable of scheduling in even more. But when I’m not technically busy, it seems like the time speeds up or something. Or, I might just be wasting a lot more time than usual. (Not that I think relaxing is wasted time. That’s not what I mean really. I’m just not really using the time to make progress on specific goals).
What’s the other one? “An object in motion stays in motion”? I guess I’m not in motion right now. And I’m not necessarily saying that’s a bad thing; I think we all can agree our American lifestyle has gotten way out of hand and this time to slow down is probably actually really good for us.
I just mean that for me personally, I tend to just start to feel kind of…lazy when I’m not busy. Maybe I’m just not used to it. But lately I feel that if I DO have time, I end up just sort of whittling it away and then wonder why I didn’t make any progress on things that I wanted to get done.

I think this could be part of what is occurring here. Since I don’t feel the pressure of “time” on me as heavily as I normally do, I am probably spending more time on tasks than I normally would (or need to). I usually operate on schedules, lists, my calendar…. Right now, I have been a bit lax in terms of planning my days. I’ve just been going with the flow more than usual, which might be making me feel a little bit out of sorts. Not that relaxing= bad; I think I maybe should just make sure to be a bit more intentional about when I want to relax and when I want to get stuff done! I know I have time for both. It’s just a matter of prioritizing each category. Although my motivation is just generally kind of low at the moment.

Okay then! Well, this was a pretty long ramble and I’m still not sure if I really expressed what the heck I am feeling today! I think I’m going to spend a little time today planning out my week. Getting a little more organized might help me to feel a bit more myself.

Yesterday my lounging from the afternoon was eventually cut off and I did get another good hour of work in and Ivan mopped the kitchen floor. So that was productive at least. We then later decided to order some Marcus theater curbside pickup popcorn and have a movie night. The popcorn didn’t really do it for me- it was $10 for a big bag so it wasn’t cheap, and it just didn’t taste the same to me at home in my living room. 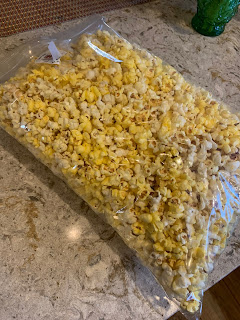 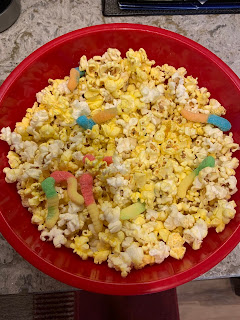 The strange sour gummy worm/ popcorn combo obsession continues. I don’t know what it is about the salty popcorn with the sweet and sour candy that I just really like!! We watched the 2016 version of Adventures in Babysitting. It was entertaining, but really not that great. Even the kids thought it was pretty far-fetched. In many ways it reminded us of Home Alone (two bad guys chasing kids and trying to “get them”, with lots of crazy things happening along the way), but Home Alone is way better. It was still decent enough though so it was an okay night!

Leonardo Da Vinci: Your history lesson for the day 🙂

I’m going to close with a couple of interesting facts about Leonardo Da Vinci. Bear with me! I promise this isn’t boring. Ethan is doing a project about him so I learned some cool stuff by default. What a fascinating guy! I need to read more about him.

*His very first real painting was The Annunciation in 1478 (the scene when the angel appeared to Mary) when he was 26. This is housed in the Uffizi Gallery in Florence, Italy. Ivan and I actually saw this a few years ago on our trip to Italy, but I really didn’t even know much about Da Vinci at the time! I don’t think I realized the significance of it when I saw it.

*Da Vinci and Michelangelo were sort of arch enemies. They were both artists in the same time period (late 1400’s) and were always in competition with each other. Neither of them liked the other and Da Vinci apparently thought Michelangelo’s The David statue was a hunk of junk. I had no idea about this and thought this was very interesting! Ethan’s book had a bunch of info about this rivalry which was especially fun to read.

*Da Vinci is famous for being one of the most world renowned artists of all time, but he actually had WAY more failures than anything else. They are only certain that he actually finished 13 paintings. He was known for starting paintings and then just abandoning them. His famous The Last Supper fresco in Milan started peeling terribly less than 50 years after completion, due to Da Vinci trying a new painting method (which failed). He worked on a massive statue of a horse for over 10 years for a Duke in Italy that was never finished. He worked on countless engineering projects that also failed. I found this…inspiring!

*No one really knows why the Mona Lisa is so famous. He worked on the painting for many years, possibly over 10 years. She was his favorite painting. But even art critics can’t really say why she became all the rage and some of his other equally good paintings are not well known at all.

Daily Gratitude:
Today I am grateful for having a curious mind! This might sound funny, but it’s true. I’m honestly grateful that I was born into a family that encouraged learning, questioning and reading. There are so many amazing things to be explored in the world and I’m grateful that I truly enjoy reading about them (or listening about them or watching videos about them!) and trying to understand them. I feel like this trait really enriches my life and I already see it developing in my children too which makes me really happy.

Anyone else out there feeling unmotivated these days??
Anyone really into art? Have you seen anything cool?
Anyone else really enjoy learning new things just for fun??